In 2013, Osnat Shperling, Sindyanna's project director for Fair Trade Fair Peace, represented Sindyanna of Galilee twice to promote the Fair Trade Fair Peace project in Italy. As part of the project, Sindyanna created a new line of products together with the Bethlehem Fair Trade Artisans (BFTA) organization. These products are hand made by manufacturers and craftsmen from the Galilee region in Israel, and from the West Bank. In our perception a real and just peace can exist when we create real economic opportunities for those in need.

The first delegation also included Lana Qumsieh from BFTA, representatives from the Italian organization COSPE (Co-operation for the Development of Emerging Countries), and volunteers helping to promote the project in Italy. During the week of their visit, the delegation members met with several interested parties such as representatives of localities and cities, Fair Trade organizations and shops, etc. the delegation members gave talks and presentations to the public, to share some insights about the conflict and life in our region. After all, Israeli and Palestinian women who are working on a project together are not a common reality.

The second delegation included Suzan Sahori from BFTA, Carlo Mileti from Cooperazione Equo e Solidale in Lecce, and Gianni Toma, representative of the Italian organization COSPE. The group toured and met with interested parties, and presented the project to diverse audiences in several cities and counties. There were  stands of the project in some fairs, and meetings were held with representatives of women organizations and Fair Trade stores owners interested in distributing the products and supporting the project. Other participants in the delegation

Learn more about this project from the press release (in Italian), Carlo Mileti's video (in Italian) and view some more lovely photos from the trips. 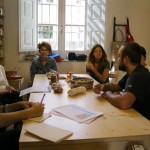